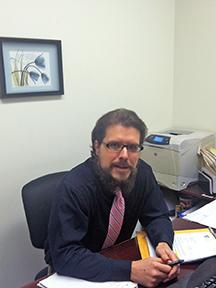 Jerry joined HVL in 2007 as a Staff Attorney with HVL’s HIV/AIDS unit. Jerry was well known by clients and agencies within the HIV/AIDS community and had a reputation as an attorney who always went above and beyond for his clients. His dedication was not only professional but deeply personal as well. As an example, he once personally assisted a client move into a different apartment, even volunteering his brother Jeff’s help – and truck. This personal affection and dedication were reciprocated by his clients. Jerry’s clients spoke of the kindness and empathy he would provide during his representation.

During his tenure, Jerry played an active role in the creation of our Harris County Law Library Pro Se (Self-Help) Assistance project. He was also a leader in Consumer law issues. Jerry was a favorite among our volunteer attorneys and was often specifically requested by law firms to be included as a participant in pro bono projects.

Jerry played a vital role in our accomplishments in this year and in all his time with us. We will strive to follow his example.

Click HERE for a tribute to Jerry written by Veronica Jacobs.

Register for our weekly update to get upcoming events and trainings.

Houston Volunteer Lawyers is the pro bono legal aid arm of the Houston Bar Association and largest provider of pro bono legal services in Harris County and the surrounding areas.

November 2022, A Message of Gratitude from Anne Chandler

September 2022, A Message from Anne Chandler